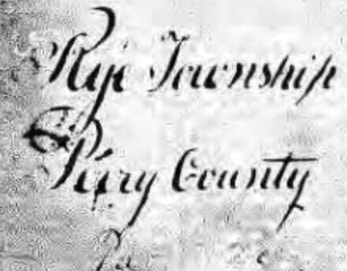 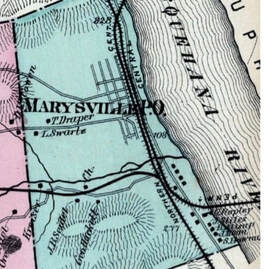 Rye Township was established in 1766 before Perry County was carved out of Cumberland County in 1820. By 1820, Rye Township was a little more than a half century old. Rye Township’s main valley (Fishing Creek Valley) has always contained rich and fertile farms, and woods for logging and regrowing for future logging, Rye Township was the site of the valley's first industry, which was British colonial settler Samuel Hunter's saw mill in 1755. Industry besides saw mills included grist mills, fulling mills, carding mills, distilleries, wagon making and black smithing, brick making, and boat making. Rye Township continues to be a beautiful and peaceful choice for people to live and commute to work outside the valley. http://www.ryetwp.com/Pages/About/TownshipHistory.aspx

Marysville Borough was established in 1866 in the footprint of early settler Samuel Hunter’s land claim in 1755 along the west bank of the Susquehanna River, directly across from Ft. Hunter in Dauphin County. In the years following the Civil War, Marysville grew to become one of the most important rail centers in the nation and stayed at the top until the 1930s when space ran out and the rail yards were moved south to Enola. But in the early 1900s the yards were bustling with dozens of steam engines moving cars and preparing trains for shipment around the nation. Trains stopped several times an hour to pick up/drop off passengers and freight. Then in 1902 Marysville became home to the west end of the world’s longest stone arch railroad bridge, which still spans the Susquehanna today. www.marysvilleboro.com

Kings Highway was surveyed and approved in 1773 by order of the Colonial Cumberland County Court and will celebrate its 250th Anniversary in 2023.  The Kings Highway was a vital link for transport of raw materials and finished consumer goods between Philadelphia and Carlisle. A little more than 10 miles of roadway connected Hunter's Ferry on the Susquehanna River to the "Great Road", now Route 34, at Sterrett's Gap. The existing sections of Kings Highway in Perry County are probably among the oldest still-used roadways in Marysville and Rye Township. According to the 1773 April court road docket, the probable route started at Hunter's Ferry at the mouth of Fishing Creek on the Susquehanna River, then went west through what is now the Lions Club Park, connected to the current stretch of Kings Highway, followed the current route of New Valley Road, then headed northwest, crossing current Valley Road (Route 850), then zig-zagged west just above Route 850, and then turned south toward Sterrett's Gap. There the pack horses and mules hauling goods would join "The Great Road," now modern Route 34 to Carlisle, even then a transportation hub. So, what was it like to haul raw materials east to the ports and finished goods back inland? Eyewitnesses told historian Silas Wright that groups of pack horses/mules carried goods on their backs. Bars of iron were bent over and around the pack-horses’ bodies and barrels were hung from them, one on each side. Horses or mules also pulled sledges loaded with cargo in summer and winter because even the then modern Kings Highway was rough compared to today's paved road surfaces, and sledges with runners navigated the bumpy road surface better than wagons with wheels. Kings Highway was built plenty wide enough to handle freight hauled on sledges.  The colonial Cumberland County Court approving the road required it be 33 feet wide from the outer edges of the shoulders/side ditches, and required that bridges be built over creeks where needed.

​Marysville Rye Historical Society, Inc. is a 501(c)(3) non-profit all-volunteer organization established in 2009 to preserve and share the history of Rye Township and Marysville Borough. The Society's ongoing goal is to educate and foster awareness, interest and pride in the township's and borough's history and heritage.  Anyone interested in local history is welcome to join. Email: marysvilleryehistory@gmail.com. Phone: Jean at 717-574-8342 or Denise at 717-503-5469.